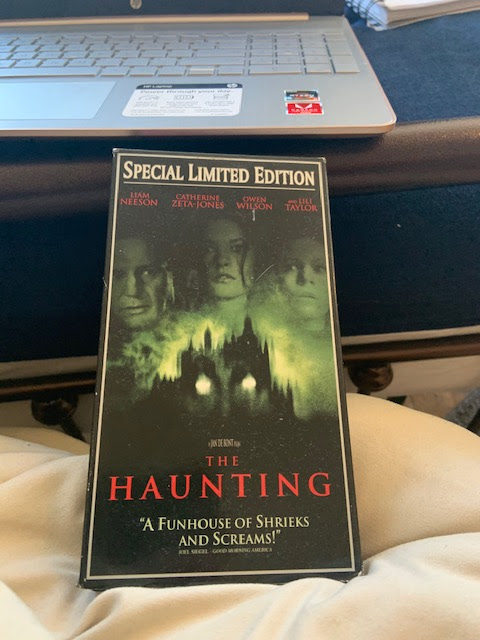 For this series appearing on Sunny All Day News I (Hannah) will review every movie in my bollovid vhs collection. I say this because right now I feel like I need to remind myself about how much I love my collection despite hating some of the movies in it, such as the horrendous reemake of the 1960s classic The Haunting.
Let me start with a little bit of context. The original Haunting (which was based on the classic novel The Haunting of Hill House) was released in 1963 and since then has been regarded as one of the greatest horror movies of all time influencing horror cinema for years to come, not to mention the fact that it is one my favorite movies in general. To put it in a metaphor, if horror movies are a religion than remaking The Haunting would be heresy. This is only more true when one watches the movie.
This film is more than just an insult to the original, it stomps all over the original, shoots it, and then spits on it’s corpse. The only thing it has in common with the original is the name and the fact that the house is called Hill House. It takes any subtlety and nuance that the original had and thoughts it out the window in favour of outdated cgi ghosts. However even without the legacy of the original the film still doesn't hold up. The acting is wooden (which is odd considering that most of these people are good actors), the cgi is laughable, and I have honestly seen Scooby doo cartoons scarier (seriously Zombie Island is fantastic). I am not exaggerating with the Scooby doo reference as this film at times feels like a R-rated saturday morning cartoon, after all they try to make pillows scary, have the most obviously evil villain in history who is evil just because, and a big shadowy cgi ghost at the end, one that is literally defeated by the power of love.
If you for some reason want to watch this it is available on dvd, usually in the 5 dollar discount bin at Walmart, but I personally recommend to just stay away from this one, it’s not even worth the 5 dollars.

Ratting: Just watch the original, or the series on Netflix.

I wanted to make these drawings because it reminds me of springtime. In the spring time, I go around in my neighborhood for a walk, taking pictures of my neighbors' gardens. It reminds me how much I care about all the people who have to stay home because of the corona-virus.

People can use my guide so that when they go walking in their own neighborhood, they can recognize flowers that they did not know about before.

#1 Lilly - I think this flower is pretty, it reminds me of memories of family.

#2 Tiger Lilly - I like the bright colors of this flower! It reminds me of night time.

#3 Dandelion - Dandelions are a pain in the butt to pull out of the ground, they come in my yard every year. I like the way that they look but I…
Post a Comment
Read more

April 24, 2020
Welcome to the latest Edition of Sunny All Day News! Unique times call for unique solutions;  this issue will be a updated live in the form of a blog. We hope that this format will allow us to publish the same level of material you know and love from Sunny All Day News in a more accessible way during the current global crisis.

Sunny All Day News is all about sharing our perspectives. And now, that feels more important than ever. All around the world people are feeling cut off from their communities; our social isolation measures are causing real emotional isolation as well. Together we hope we can fight back this feeling through building an online community of contributors and readers. I personally invite you to be a part of this experiment, to provide feedback and to get involved.

Our magazine is meant to embody the Good News to be found all around us. Through art and writing, we create a representation of our world that reflects what we are interested in, what we are proud of, and …
Post a Comment
Read more

May 06, 2020
Over the past two Wednesdays a group of highly creative individuals have been creating a fantasy realm all their own. Over the coming weeks we will be starting a series of updates from that world called "Dispatches from the land of Garthunder".

In the first installment we will give you a glimpse into a popular travel guide to the land of Garthunder. The book was discovered recently in a bin by the side of the road leading out of the city of Uramus.

Stay tuned for more dispatches from the land of Garthunder!